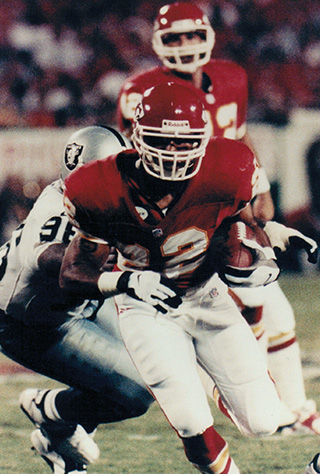 The 1993 Foothill High graduate was a running back for two seasons with the Kansas City Chiefs, starting five games in 1999. A third-round draft pick by Kansas City in 1998, Shehee concluded his pro career with the Los Angeles Xtreme of the XFL in 2001 when he finished 10th among XFL rushers with 242 yards. Shehee had an outstanding career at the University of Washington from 1994-97, averaging a school-record 5.6 yards a carry. In his first collegiate start, Shehee had 171 yards on 32 carries with two TDs against Notre Dame. He helped the Huskies to a 7-1 start to the 1997 season before a knee injury sidelined him three games. Shehee returned for the postseason and set an Aloha Bowl record with 193 yards to help Washington down Michigan State 51-23. He finished his collegiate career with 2,150 rushing yards on 384 carries with 27 touchdowns and added 44 receptions for 376 yards and a TD. Shehee is now a teacher at Bakersfield High.